Article of the Week: "Marginalia" by Billy Collins / "Book Lovers Fear Dim Future for Notes in the Margins" /

Book Lovers Fear Dim Future for Notes in the Margins

CHICAGO — Locked in a climate-controlled vault at the Newberry Library here, a volume titled “The Pen and the Book” can be studied only under the watch of security cameras.

The book, about making a profit in publishing, scarcely qualifies as a literary masterpiece. It is highly valuable, instead, because a reader has scribbled in the margins of its pages.

The scribbler was Mark Twain, who had penciled, among other observations, a one-way argument with the author, Walter Besant, that “nothing could be stupider” than using advertising to sell books as if they were “essential goods” like “salt” or “tobacco.” On another page, Twain made some snide remarks about the big sums being paid to another author of his era, Mary Baker Eddy, the founder of Christian Science.

Like many readers, Twain was engaging in marginalia, writing comments alongside passages and sometimes giving an author a piece of his mind. It is a rich literary pastime, sometimes regarded as a tool of literary archaeology, but it has an uncertain fate in a digitalized world. 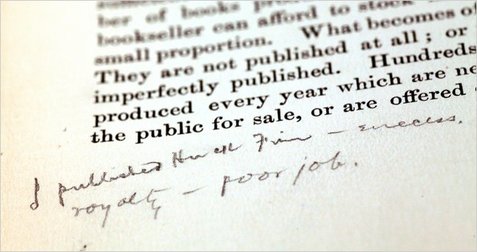 Above: Mark Twain's annotations about his novel Huckleberry Finn in Besant's book
“People will always find a way to annotate electronically,” said G. Thomas Tanselle, a former vice president of the John Simon Guggenheim Memorial Foundation and an adjunct professor of English at Columbia University. “But there is the question of how it is going to be preserved. And that is a problem now facing collections libraries.”

These are the sorts of matters pondered by the Caxton Club, a literary group founded in 1895 by 15 Chicago bibliophiles. With the Newberry, it is sponsoring a symposium in March titled “Other People’s Books: Association Copies and the Stories They Tell.”

The symposium will feature a new volume of 52 essays about association copies — books once owned or annotated by the authors — and ruminations about how they enhance the reading experience. The essays touch on works that connect President Lincoln and Alexander Pope; Jane Austen and William Cowper; Walt Whitman and Henry David Thoreau.

Marginalia was more common in the 1800s. Samuel Taylor Coleridge was a prolific margin writer, as were William Blake and Charles Darwin. In the 20th century it mostly came to be regarded like graffiti: something polite and respectful people did not do.  Paul F. Gehl, a curator at the Newberry, blamed generations of librarians and teachers for “inflicting us with the idea” that writing in books makes them “spoiled or damaged.”

But marginalia never vanished. When Nelson Mandela was imprisoned in South Africa in 1977, a copy of Shakespeare was circulated among the inmates. Mandela wrote his name next to the passage from “Julius Caesar” that reads, “Cowards die many times before their deaths.”

Studs Terkel, the oral historian, was known to admonish friends who would read his books but leave them free of markings. He told them that reading a book should not be a passive exercise, but rather a raucous conversation.

Books with markings are increasingly seen these days as more valuable, not just for a celebrity connection but also for what they reveal about the community of people associated with a work, according to Heather Jackson, a professor of English at the University of Toronto.

Professor Jackson, who will speak at the symposium, said examining marginalia reveals a pattern of emotional reactions among everyday readers that might otherwise be missed, even by literary professionals.

Just about anyone who has paged through a used college textbook has seen marginalia, and often added comments of their own.

Not everyone values marginalia, said Paul Ruxin, a member of the Caxton Club. “If you think about the traditional view that the book is only about the text,” he said, “then this is kind of foolish, I suppose.”

David Spadafora, president of the Newberry, said marginalia enriched a book, as readers infer other meanings, and lends it historical context. “The digital revolution is a good thing for the physical object,” he said. As more people see historical artifacts in electronic form, “the more they’re going to want to encounter the real object.”

The collection at the Newberry includes a bound copy of “The Federalist” once owned by Thomas Jefferson. Besides penciling his initials in the book, Jefferson wrote those of the founding fathers alongside their essays, which had originally been published anonymously.

“It’s pretty interesting to hold a book that Jefferson held,” Mr. Spadafora said. “Besides that, if we know what books were in his library in the years leading to the writing of the Declaration of Independence, it tells us something about what might have inspired his intellect.”

In her markings, Rose Caylor gave us a sense of her husband, the playwright Ben Hecht. In her copy of “A Child of the Century,” which Mr. Hecht wrote, she had drawn an arrow pointing to burns on a page. “Strikes matches on books,” she noted about her husband, who was a smoker.

Some lovers of literature even conjure dreamy notions about those who have left marginalia for them to find. In his poem “Marginalia,” Billy Collins, the former American poet laureate, wrote about how a previous reader had stirred the passions of a boy just beginning high school and reading “The Catcher in the Rye.”

As the poem describes it, he noticed “a few greasy smears in the margin” and a message that was written “in soft pencil — by a beautiful girl, I could tell.” It read, “Pardon the egg salad stains, but I’m in love.”